This project was about finding something that we were interested in learning about that related to plants growing and then being able to tie what we were learning in math to that. For my group we decided that we wanted to learn about aquaponics and how that helped plants grow and save water. An aquaponic system is a system of farming where fish are used to "feed" the plants with the nutrients that are in the fish poop. The plants then in turn clean the water for the fish.
The reason this research matters is because it is a alternate to regular farming and something that is much less wasteful than traditional methods of farming. Some of the biggest things that make a big impact is the fact that aquaponics save up to 90% of the water used compared to traditional farming which is known to waste up to 60% of the water. Aquaponics also are known to help plants grow up to 4x faster because of the fact that the nutrients in the fish poop are brought directly to the roots so the plants are able to put more effort into growing instead of using all that energy to look for nutrients.
I would have changed the fish that we used and the plants that we grew. In this project we used small goldfish and grew cat-grass. In the future I feel that a bigger fish would have been better because of the fact it would discreet more. I would have also changed the plant because cat-grass is known to grow really fast and doesn't need as many nutrients as other plants would.
Final Chi Squared value= 1.5
This gives our hypothesis a 21.5% chance of being true

Purpose: We used this lab to better our understanding of photosynthesis and hoe plants use light to make food. We used an interactive lab to help us better understand the process. We investigated how leaves use carbon products to create oxygen products. To do this a  bicarbonate ion (from baking soda) served as the carbon source for the photosynthesis. As photosynthesis happens oxygen is released into the leaf which then changes the buoyancy, causing the leave disks to rise.​
What did you do? During the lab we cut out 10 pieces of a leaf with a hole puncher and put them into a syringe with a specific type of carbon water. We then created a vacuum by covering the top of the syringe with our finger and pulling the end. We shook the syringe in a circular motion to make the leaves sink to the bottom. After the leafs sank to the bottom of the syringe we emptied them out into regular water in a cup and put them under either a regular or colored light and saw how long it took them to float back up to the surface of the cup.

What Interested you? This whole lab was really interesting. It was exiting to see how photosynthesis really worked and to see the leaves "perform" photosynthesis in real life.
Results: My results are definitely off I feel. I think this because on the master spread sheet everyone put in their data in different measurements so to find averages was really hard. 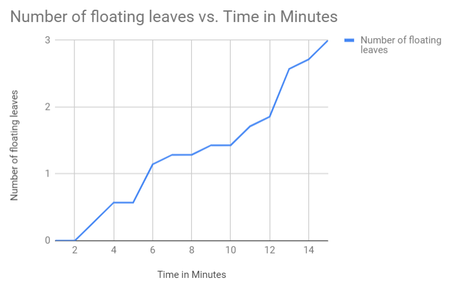 Findings: As the plants grew I quickly noticed the first thing that set them apart, the roots. On monocot roots they are much crazier and spread every where. On dicots the roots have a more central root that has smaller sub roots that split off. The next thing that I noticed was the leaves. On the corn or the monocot the leaves had parallel leaves whereas on the mung bean or dicot the veins on the leaves were more of  a net. After my original prediction and then these observations I was sure that the corn was a monocot and the mung bean was a dicot.

Conundrums, limitations, or changes to the experiment: I feel that I didn't have any conundrums and my experiment went very well. I always had water and had my plant in the same spot at all times, right in the window with lots of sun, I didn't drown my plant but always kept it moist with water so it could survive.
Powered by